Hilton’s new Tempo brand was fine-tuned during the pandemic 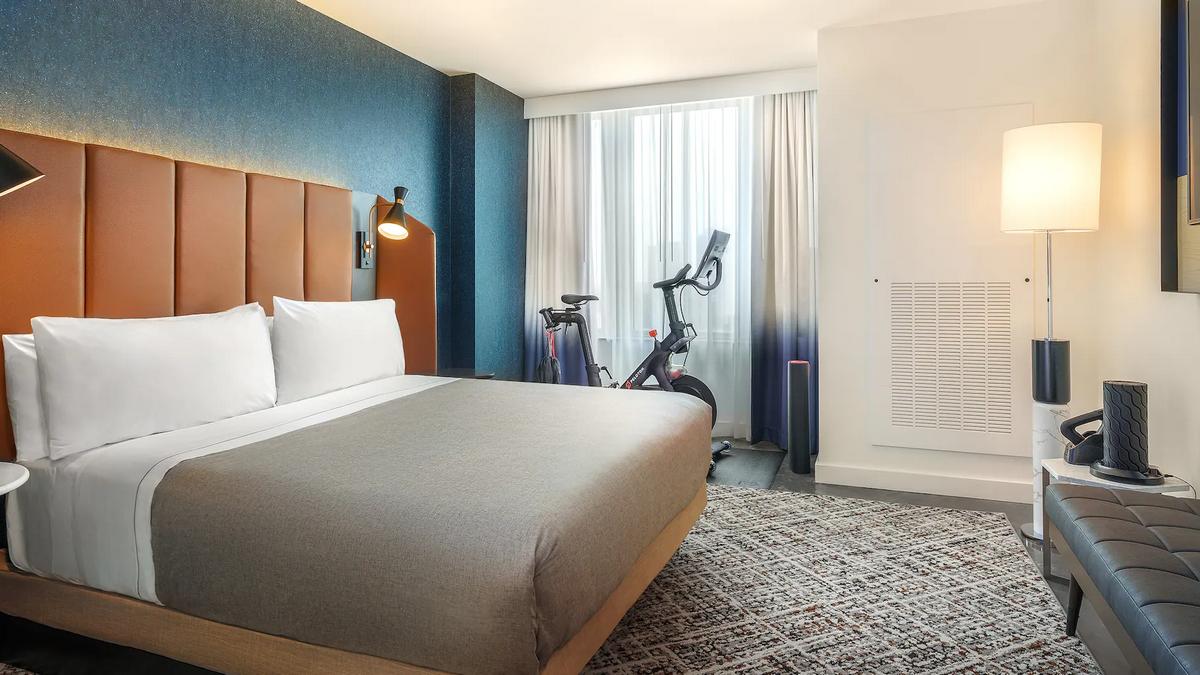 When it comes to launching a hotel concept, timing can be everything. For Tempo by Hilton, which made its debut just ahead of the pandemic in early 2020, that timing seemed less than ideal.

However, according to Tempo global brand head Kevin Morgan, the pandemic ended up being something of a blessing in disguise for the limited-service lifestyle brand. Originally on track to open its inaugural hotel in mid-2021, the brand’s rollout was inevitably delayed by Covid. The first Tempo location, comprising 661 rooms, is now expected to debut in the heart of Times Square next year.

“The pandemic was actually a gift for Tempo,” Morgan said. “It gave us 12 months to go back to the drawing board. We didn’t throw out the baby with the bathwater, but we were able to really fine-tune everything.”

Chief among Tempo’s pandemic-era changes was an increased focus on wellness. The brand began experimenting with a new fitness- and well-being-oriented room category known as the Wellness Room, stocked with amenities like an in-room Peloton bike and Therabody massage therapy devices.

In order to determine whether Tempo should align with the wellness theme, the Tempo team started testing the concept by deploying in-room wellness amenities across a few rooms at Hilton-branded properties in markets like Seattle, Los Angeles, Boston and Charlotte, among others.

And in an effort to take that testing to the next level, the brand also did something highly unusual: It took over 10 rooms at an existing Canopy by Hilton hotel in Bethesda, transforming them into bookable Tempo by Hilton Wellness Rooms. In addition to featuring the wellness amenities like the Peloton Bike, resistance bands, two-pound weights, a yoga mat and a massage gun and vibrating foam roller by Therabody, the rooms also have Tempo-specific design and branding attributes.

“This really gave us the ability to see the elasticity around demand from the consumer but also just see how it would function, the wear and tear, the maintenance and all of that,” Morgan said.

Morgan added that demand for the Tempo-branded rooms at the Canopy has been “off the charts,” attracting both longtime Peloton devotees and those completely new to the brand.

“We’ve had great customer feedback,” said Morgan. “And at this hotel, the rooms are mostly requested by our Hilton Honors members, especially our Gold and Diamond members.”

The additional time used to fine-tune the Tempo concept is having an even bigger impact than anticipated. The Wellness Rooms tested in other Hilton-branded hotels across the country proved so successful that the accommodation type is expected to roll out “across the enterprise” under a variety of Hilton brands, Morgan said.

And while Hilton isn’t the first major hospitality company to link up with Peloton in recent years — Marriott’s Westin brand, for example, has long offered Peloton bikes in select fitness centers and its WestinWorkout rooms — Hilton’s partnership with the fitness brand has been one of the industry’s largest in scope.

Hilton in October said that nearly all of its 5,400 hotels in the U.S. would get at least one Peloton bike in their fitness centers by the end of this year, in addition to having them in Wellness Rooms. Hilton Honors loyalty program members are also being provided access to special offers, including a trial subscription to the Peloton app.

According to Morgan, Peloton’s bikes and programming are uniquely well suited for the hospitality space.

“It’s easy to implement, easy to maintain and can be scaled quickly,” he explained. “And if you look at Peloton from a partnership side of things, they also have this digital platform. So, there’s a lot of runway with what we can do around the [digitally] connected room as well as around Honors partnerships and the types of incentives or deals we can offer to our members.”

Bluestone Lane is in, the buffet is out

Other modifications made to the Tempo brand during its long pandemic-era rollout centered on food and beverage.

Morgan and his team opted to scrap Tempo’s original “harvest table” breakfast buffet in favor of a partnership with Australian-inspired café chain Bluestone Lane. The eatery, known for its high-quality and healthy fare, promised plenty of operational upside.

“The way that they use their ingredients, process their food and all the steps around that is superefficient,” said Morgan. “So that allowed us to throw out the buffet but still get more people through that space and ultimately offer a more elevated experience.”

Under the partnership, some Tempo hotels will be home to actual Bluestone Lane outposts. Others, including the Tempo by Hilton Times Square, will showcase outlets developed by the Bluestone Lane team that will have different branding but feature Bluestone Lane-influenced menus.