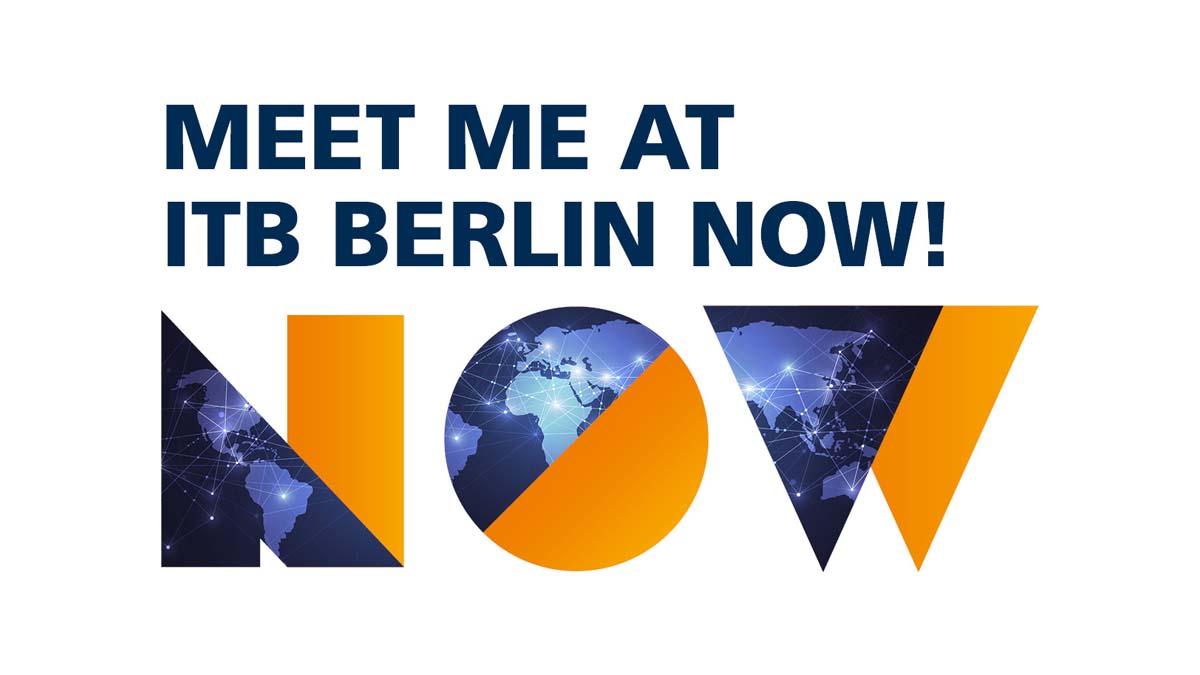 The World’s Leading Travel Show has the latest stories from the virtual edition of ITB Berlin NOW 2021 online in its ITB Newsroom and on ITB Berlin News. This is where media representatives and bloggers can obtain free articles for their editorial coverage of sessions at the ITB Berlin NOW Convention, exhibitor press conferences and presentations as well as interviews with leading industry figures.

Tourism industry on course for recovery: good prospects for Easter holidays
Virtual ITB Berlin NOW with more than 3,500 exhibitors from 120 countries is helping the industry to restartEaster holidays this year were still possible, both at home and abroad, what was needed was an intelligent testing strategy for the coronavirus. That was the opinion voiced by Norbert Fiebig, president of the German Travel Association (DRV) at the virtual opening press conference of ITB Berlin NOW.

A video of the highlights at the opening press conference, which was streamed live from the ITB broadcasting studio at the CityCube Berlin, and which can used for editorial purposes free of charge.

Saxony presented as the official cultural destination partner of ITB Berlin NOW 2021
Numerous holiday attractions combining the natural world and culture
“I regard this trade show as a symbol of hope for the travel industry”, said Saxony’s Minister of State for Culture and Tourism, Barbara Klepsch, on Tuesday at the start of ITB Berlin NOW, which this year features the Free State of Saxony as the official cultural destination.

Where are we heading?
CEOs from TUI and DER Touristik at the ITB Berlin NOW Convention report on prospects arising from and following the crisis
Few industries have been as hard-hit by the pandemic as tourism. Friedrich Joussen, Chairman of the Board of the TUI Group, and Sören Hartmann, Chairman of DER Touristik Group, are using the ITB Berlin NOW Convention to explain how their companies intend to find a way out of the crisis.

Not all airlines want government assistance
Ryanair’s CEO is highly critical – head of Delta expresses his thanks to ITB Berlin NOW
The CEO of Ryanair, Eddie Wilson, was highly critical of the state support given to airlines during the coronavirus crisis. In contrast, the head of the US company Delta Airlines, Ed Bastian, expressed his gratitude for government assistance. This was revealed in the interviews they gave at the ITB Berlin NOW Convention.

Emirates and Air France-KLM anticipate a rapid recovery
At ITB Berlin NOW the CEOs Clark and Smith are focusing particularly on wealthy travellers
The CEOs of Emirates and Air France-KLM were optimistic that passenger numbers would soon return to normal around the globe. In interviews at the ITB Berlin NOW Convention they were pinning their hopes above all on the wealthy long-haul travel market.

A destination worth visiting any time of year
The Japanese capital Tokyo is presenting its many attractions at ITB Berlin NOW
The Japanese capital Tokyo is hosting the 2021 Summer Olympic Games and Paralympics. Whether or not international visitors will be allowed to attend is still undecided – all the same, Japan’s mega-city presented its attractions on Tuesday at ITB Berlin NOW.

Hotels and catering after the coronavirus: what remains the same, what will change? 2021
Hoteliers at the ITB Berlin NOW Convention: emerging from the crisis with optimism
The pandemic is being accompanied by a ban on accommodation. Hotel operations have come to a halt at many places around the world: The ITB CEO Interviews at the ITB Berlin NOW Convention provide an opportunity for top executives of leading hotel groups to provide insights into (hotel) life during and after the pandemic

Holidays on board: “Like being in a secure bubble”
Cruise lines express their optimism at ITB Berlin NOW
During his ITB CEO interview at the ITB Berlin NOW Convention, Pierfrancesco Vago, head of Geneva-based MSC Cruises, admitted that this company found itself on a fast learning curve at the start of the pandemic: beginning in March 2020 the shipping line had to repatriate 70,000 passengers and 30,000 crew members from all over the world.

Locally many things now look different
Trend researcher Quinby at ITB Berlin NOW: placing hopes in high earners
In some cases there have been dramatic changes in the sort of local attractions associated with tourism, according to Douglas Quinby, founder of the Arival travel platform, at the ITB Berlin NOW Convention.

Secure eco-systems for travellers
Monika Wiederhold from Amadeus calls for health information to be integrated in IT solutions at ITB Berlin NOW
“We cannot go back to the way things were“, said Monika Wiederhold quoting WHO General Secretary Tedros Adhanom Ghebreyesus at her introductory speech at the ITB Berlin NOW Convention. The CEO of Amadeus Germany GmbH called for the creation of secure eco-systems with the help of new technologies.

Dominican Republic focusing on economic recovery
The island nation is presenting its responsible tourism recovery plan at ITB Berlin NOW
Petra Cruz from the tourist board of the Dominican Republic in Frankfurt showed her delight on the Brand Card of ITB Berlin NOW. The safety concepts that her home country had implemented had even convinced Zurab Pololikashvili.

ITB Berlin NOW will take place from Tuesday, 9 to Friday, 12 March for trade visitors only and as an entirely virtual event. ITB Berlin is the World’s Leading Travel Trade Show. As part of ITB Berlin NOW, the ITB Berlin NOW Convention, the largest travel industry event of its kind, will also take place as a virtual event. The World Tourism Cities Federation (WTCF) is the co-host, Mascontour Track is the sponsor of the ITB Future Track, Google and Lufthansa are track sponsors of the ITB Marketing & Distribution Track, the Federal Ministry for Economic Cooperation and Development (BMZ) is the ITB Sustainability Track partner,  SIO AG is the track sponsor of the eTravel DATA TALKS and Studiosus is the session sponsor. We would also like to especially thank further sponsors: the Official Buyers Circle Sponsor Philippines, the Luxury Sponsor Botswana Tourism as well as the NOW Star sponsors Indonesia, Maldives, Philippines and Tourism Malaysia, the NOW Shine sponsors BWH Hotel Group and Huawei Petal Search and the NOW Light sponsors Clock PMS+, Deutsche Hospitality, Dominican Republic Ministry of Tourism, Madrid, NG Phaselis Bay, Penguin Ocean Leisure, SERVICE-REISEN GIESSEN, SR Travel and Via Hansa & Borealis.

For exhibitors, trade visitors and the media, participation in the ITB Berlin NOW Convention is included in the price of a ticket. Additional information is available at www.itb.com/now and from the ITB Social Media Newsroom.