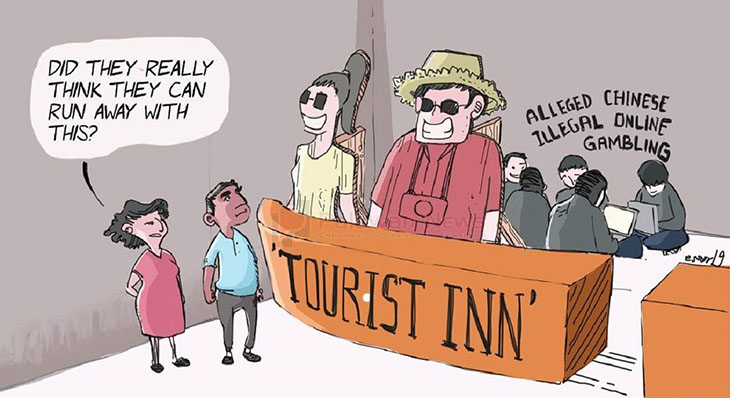 Puerto Princesa is a popular tourist city with many beach resorts and seafood restaurants. It has been acclaimed several times as the cleanest and greenest city in the Philippines.

The city is located in the western province of Palawan, and westernmost city in the Philippines and has about a quarter of a million people living there.

Many in this town feel the town is overrun by Chinese nationals, mostly tourists. There are many newly organized establishments catering to tourism forms the backdrop of this seeming trend which has prompted City Hall officials to call for an investigation.

In Manila and other major cities, the reported involvement of Chinese nationals in online casino gambling has come to a head and has enforcement agencies having their hands full trying to curtail cybercrime activities.

The recent growth of tourism in Puerto Princesa City has been fueled by unprecedented waves of arrivals of Asian visitors, mainly from Korea and China. What has been otherwise a slumping sector has recently become a vibrant business to local establishments catering to tourists.

It is not certain what has triggered such sudden boost, particularly in Chinese arrivals, but it is well worth noting that all these have happened within the backdrop of the present administration’s diplomatic pivot towards Beijing.

There are certain red flags that needed to be raised concerning this trend, particularly because of the unique situation of Palawan being the territorial doorstep to the disputed West Philippine Sea. With Beijing aggressively maintaining its physical dominance over the region, and with Manila displaying a laissez-faire foreign policy stance, Palawan needs to take care of its own backyard.

As City Hall is set to conduct a probe on illegal Chinese gambling activities, in the wake of recent arrests of certain Chinese nationals, these broad questions of national security also need to be raised.