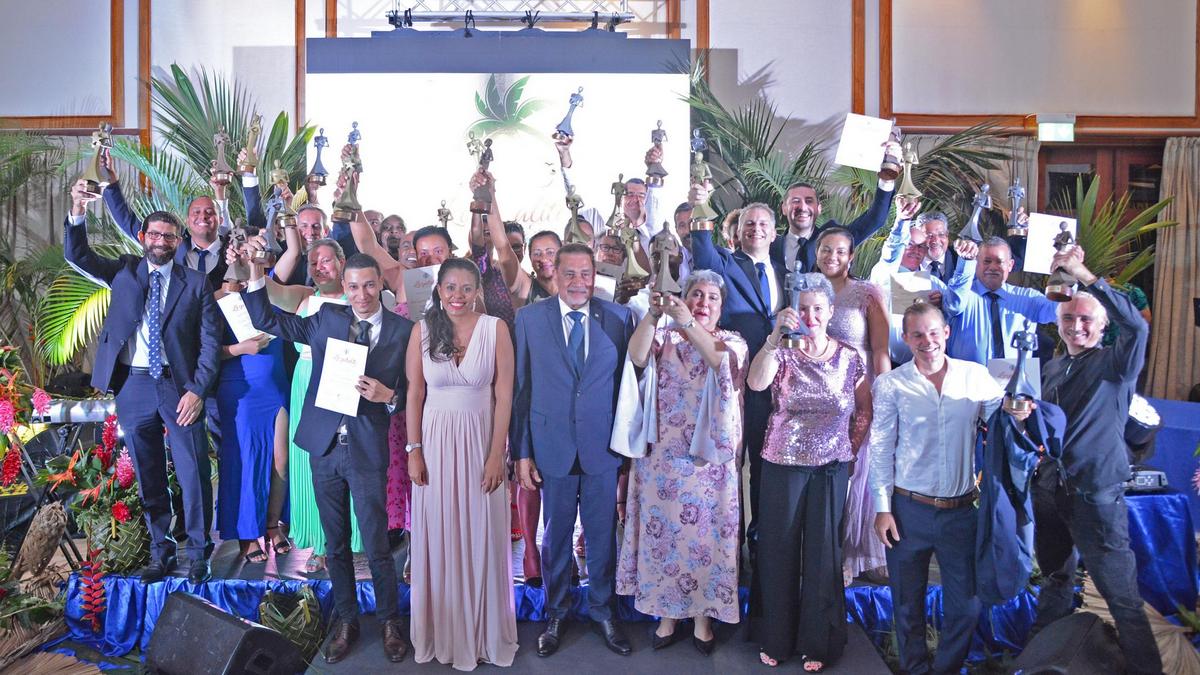 Upon arriving at the venue which was hosted at Kempinski Resort on Saturday, October 1, invitees, comprising nominees, stakeholders, and partners of the Tourism Department, were greeted by a traditional band performing a Moutya. Keeping to the theme, ‘Rethinking Tourism; Experience our Culture,’ the night was filled with spectacles of traditional moutya, sega and Kanmtole performances.

The ceremony, which was the first of its kind, honored tourism industry individuals and companies for their exceptional customer service. The night saw the winning candidates receive 57 prizes, including three winners from each of the seven Best Tourism Employee categories and the ten Business of Tourism categories. A special award was given to the business that received the most praise for its customer service, as well as an award for the people’s choice.

Businesses evaluated under predetermined criteria through a combination of formal and mystery examinations were categorized under the Tourism Business category. The Best Tourism Employees category recognized those who excelled in their field and left a lasting impression on the judges, co-workers, and employers. The winners were awarded a trophy designed by local sculptor Joseph Norah.

He praised them for their excellent job and underlined that they should now serve as ambassadors for the program and inspire their fellow co-workers to provide the same level of service.

Following Minister Radegonde’s speech, the Principal Secretary for Tourism, Sherin Francis, announced the Lospitalite Lafyerte Sesel service excellence awards 2.0 in a heart-warming vote of thanks. Registration for the second edition will open on October 3.

The Tourism Week kicked off with the “Rendez-vous Diguois” cultural fair at L’Union Estate on La Digue on September 24 and 25. The festival’s official opening was a significant occasion centred on local artists and the rich creole heritage of the Diguois. Students from the La Digue tourism club, local bands and cultural groups, delivered traditional performances, and visitors experienced a live cooking class and variations of the creole cuisine.  This first event on the Seychelles Tourism Festival calendar was in line with the international theme for world tourism day, rethinking tourism.

Ahead of its official launch on September 30, the tourism team visited the Biodiversity Center from September 26 to September 29 to get a first-hand look at the newest tour service introduced by the Seychelles Parks and Gardens Authority (SPGA). The tour will showcase the rich heritage of Seychelles through the extensive endemic and native plant species found at the center. The experience is facilitated by the expertise of the biodiversity center’s in-house tour guides.

In honor of World Tourism Day, Minister Radegonde issued a message to the media on Tuesday, September 27. To mark the day, the annual meet and greet, traditionally held at the Seychelles International Airport at Pointe Larue, was instead hosted on all three main islands. The Botanical Garden on Mahé, the Pirogue restaurant on Praslin and L’Union Estate on La Digue offered tea infusions and creole food samples to its visitors. The three locations were animated with live performances, comprising entertainment by the Reviv band on Mahé, Tropical stars’ band on Praslin, and a traditional Mardilo dance by the Masezarin Group on La Digue.

Simultaneously, there was the unveiling of the Tourism Pioneers at the Seychelles Tourism Academy. Individuals who have made significant contributions to the Seychelles tourism sector are honoured at this yearly event. This year, 13 pioneers were recognized.

The following day, the tourism club quiz final and prize-giving ceremony was held at the Hilton Labriz jetty. Due to unforeseen circumstances, the quiz final and Concours D’expressions Orales were postponed from the original date of September 28.

In addition to the week’s events, the Tourism Department also aired a series of kid interviews. Children between the ages of 8 and 11 had the chance to speak to various artistic personalities about their respective occupations. This was an initiative done to promote cultural tourism.

The Tourism Department also celebrated tourism week through various internal events at the Botanical House, one of which was the sampling of locally made juices and creole treats.