Taste of Mexico in Russia: a window into Mexico at the 2018 World Cup 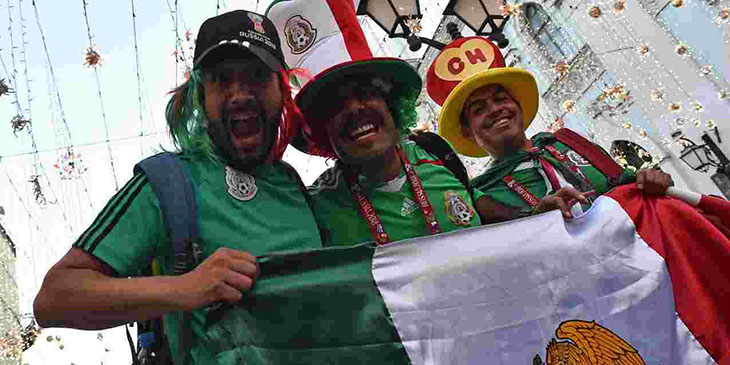 Mexicans are internationally renowned for being the life of the party at every sporting event and the 2018 Russian World Cup is no exception; more than 45 thousand Mexicans have traveled to Russia to support their team, and to share their contagious spirit with the world.

Through art, culture and soccer, Mexico is making its mark on the 2018 World Cup. Located in the Gostiny Gvor store, and only a few steps from the Kremlin, the Mexican cultural pavilion “A Taste of Mexico,” has positioned itself as one of the highlights of Moscow’s cultural agenda during the celebration of the soccer tournament. Located in an 8,500 square-meter tent, the House of Mexico has become an iconic and colorful exhibition that presents foreign tourists with a small glimpse of Mexican folklore.

With more than 4,500 attendees per day, visitors have been able to enjoy Mexican cuisine and concerts put on by well-known artists such as Molotov, OV7, Matute, Banda El Recodo and more. The pavilion also includes performances by Mariachi’s at various events, the Huichol art exhibition by celebrated artist Ermenegildo Nazario and the presentation of the “Day of the Dead” parade in the Red Square, which is set to occur on June 29.

During the official opening of this pavilion, Mexico’s ambassador to Russia, Norma Pensado, stressed: “initiatives like this have a particularly special value in current times because it is very important to build bridges of understanding between cultures.” The ambassador added, “this event is also an important step in strengthening relations between Mexico and Russia, which are in a process of reactivation.”

In addition, taking advantage of the worldwide boom of Mexican gastronomy, “A Taste of Mexico” will host a gala dinner called “Gastronomy of Two Worlds”, inside the pavilion. The event will include dishes designed by the renowned Chefs Jorge Vallejo (Quintonil), Gerardo Quezada (Angelopolitano) and the rising start of Mexican pastry, Sofia Cortina. The second part of this event will take place from October 26 to November 20 in Mexico City at the Kandinsky exhibition at the Fine Arts Palace. For this event, the best Russian chefs will travel to the capital to cook.

These strategies, implemented by the Mexican Tourism Board, seek to diversify international markets in order to promote Mexico’s touristic attractions. As of today, the Pavilion receives more than 6,000 international visitors, who experience the cultural richness of Mexico through gastronomy, music and events. “The experience underlines Mexico’s reputation as a friendly country with strong cultural, diverse and authentic roots,” said Hector Flores Santana, general director of the Mexico Tourism Board.

These actions not only help to position the contry as an attractive tourist destination globally, but also promote it as a safe bet for national and international investors, which will allowed for improved relations with Russia, an emerging market with great potential.