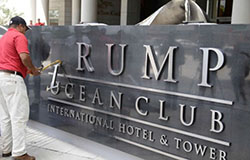 Ever since Trump became President of the United States, how have his hotels been doing? Many feared he would use his political position to advance his business endeavors. As far as his hotels go, has that worked or has it backfired?

Turns out it’s a mixed bag. Many hotel properties are struggling or have outright fallen flat. But some are doing well, especially the Trump Hotel in Washington DC. The Trump Hotel on Pennsylvania Avenue near the White House has been vigorously used by Republicans and representatives of foreign governments since 2016 when Trump took office.

In the final analysis, however, the Trump Organization is abandoning previous plans to expand its hotel business. Not just hotels are suffering, as the organization has had to deal with a number of setbacks since Donald took office in the White House.

There were plans for 4 new hotels in the Mississippi Delta that have been scrapped. The hotel division of the Trump Organization canceled the development of four new mid-tier hotels there. Current hotels such as in New York and Chicago have lots of vacant space in their towers.

The organization’s executives have said there may be the possibility of new hotels in parts of the country that supported Trump for President, such as Dallas, Texas, and that the organization has 39 signed letters of intent for hotels in 24 U.S. cities. Four hotels may also be developed by a pair of Indian-American brothers in Cleveland, Clarksdale, and Greenville, Mississippi.

Before Trump became President, he often said the most valuable asset of his organization was his name. But since then, it has become a liability – so much so that it has been removed from buildings in New York, Toronto, and Panama City.

The Trump Organization is now run by his two eldest sons, Eric and Donald, Jr., and they say politics have gotten in the way of future hotel development. Eric blames the Democrats, saying they “are only interested in Presidential harassment.” His reference is based on the broad investigations being undertaken into Trump’s businesses and information based on “fake news.” Donald, Jr. said the company will return to growth once their father leaves office, and they can return to “doing what we do best, which is building the best and most luxurious properties in the world.”

Just as in Trump’s taxes, the organization does not disclose its financial performance. According to Bloomberg Billionaires Index, however, signs indicate that Trump’s net worth has dipped 7 percent over the past 2 years, an equivalent of nearly $3 billion.