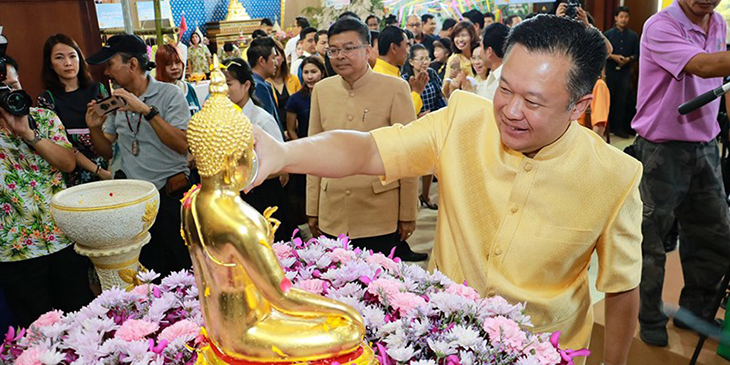 TAT Governor Mr. Yuthasak Supasorn said secondary destinations offer a different take on the uniqueness of time-honoured Thai traditions at this most important time of the year.

“Thailand’s emerging destinations and secondary cities have a unique charm that is often found in smaller towns around the world. Some traditions are maintained in these places that might have faded in larger more established destinations like Bangkok or Pattaya.

“While international tourists see Songkran as a boisterous fun festival, for Thais it is a traditional time to place family first, pay respect to one’s elders and visit temples. Visitors should get more out of Songkran if they take time to embrace its origins and traditions,” he added.

In addition to traditional Songkran celebrations, each of the three destinations – Tak, Mukadahan and Ranong – offers unique attractions.

Tak province is home to spectacular natural attractions including the largest and arguably most beautiful waterfall in Thailand. This small town in the Lower North of Thailand also serves as an important crossroads for travellers between Bangkok and Chiang Mai and is an important westerly route into Myanmar at Mae Sot (Thailand) / Myawaddy (Myanmar), with cross border access now possible due to relaxed restrictions.

Mukdahan is one of the northeastern provinces of Thailand bordering the Mekong River, across which lies Savannakhet Province of Lao PDR. Roughly 4 km north of the city’s centre, the second Thai-Lao Friendship Bridge connects it with Savannakhet city.

Ranong is Thailand’s most northern province along the Andaman coast sharing a land border with Myanmar. Varied attractions and activities make this a great place for anyone wanting to experience one of Thailand’s lesser-visited Southern provinces. Dense forest and lush agricultural lands cover much of the province, and there are numerous islands, big and small, off the coastline.

For more details of the festivities organised and supported by TAT, please visit: Songkran Festival 2019.